If you’ve ever been to Lubbock, Texas, home of Buddy Holly, Texas Tech, and the Chilton, you’ve probably also tried the Mafia Queso at Orlando’s or grabbed burgers and beers at Caprock Café. With two locations each, both Orlando’s Enterprises, Inc. and Caprock Restaurants, Inc. are owned by three local families. Behind those families is President & CEO Loyd Turner, who has been central to these Lubbock restaurants’ successful operations since 1978 when he bought in with the original owner, Mike “The Wild Italian” Cea. 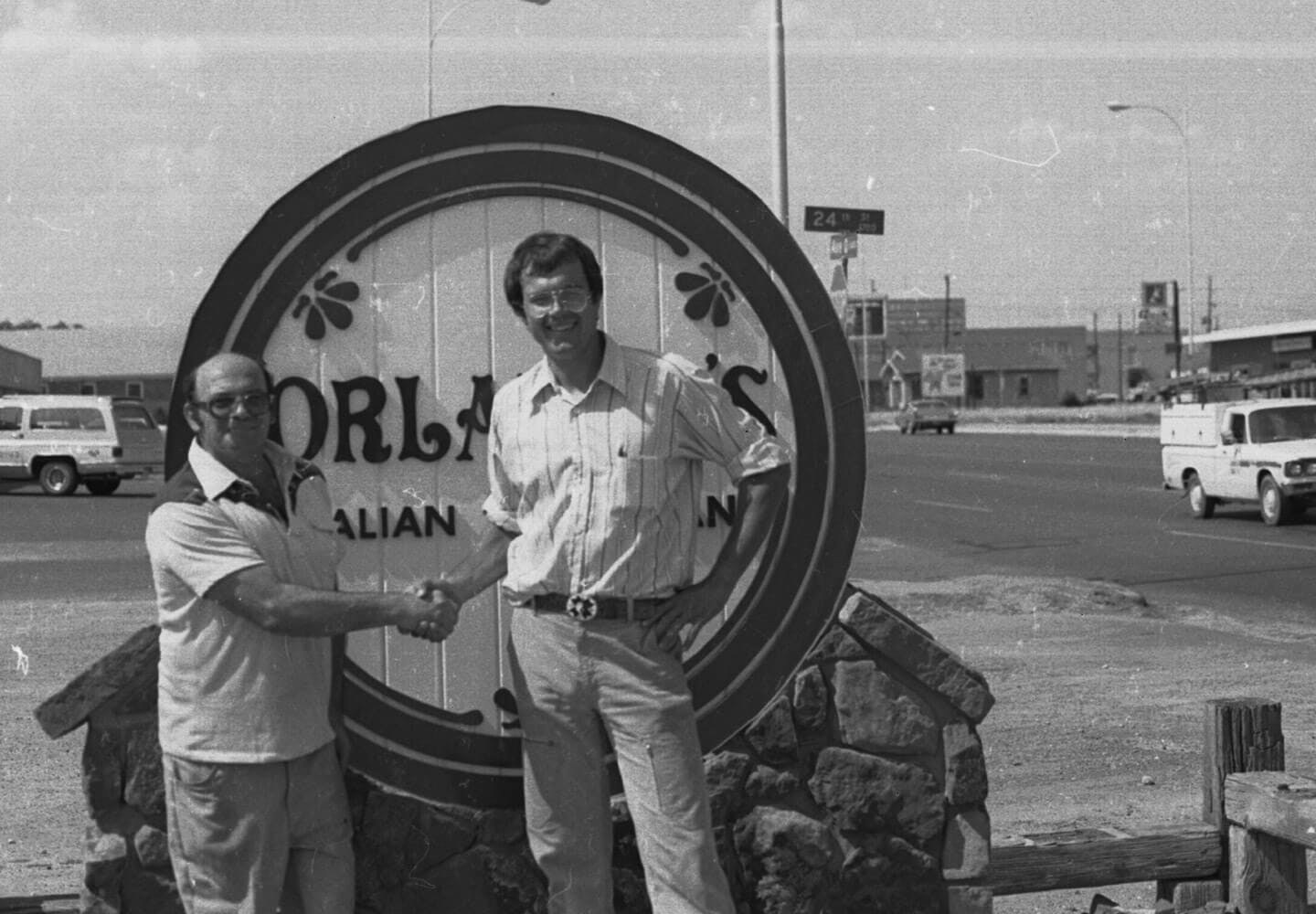 Mike had made his way from Brooklyn, New York, to Albuquerque, New Mexico, where he got his start in the restaurant industry, opening the Casa Luna Italian Restaurant with some of his friends. Casa Luna expanded into Las Cruces and Roswell, New Mexico, but Mike wanted to branch out on his own. When heading back east to visit his family, he stopped in Lubbock at the prompting of his cheese supplier and ended up signing the lease for 2402 Avenue Q, the original Orlando’s Italian Restaurant location, which is still open today. 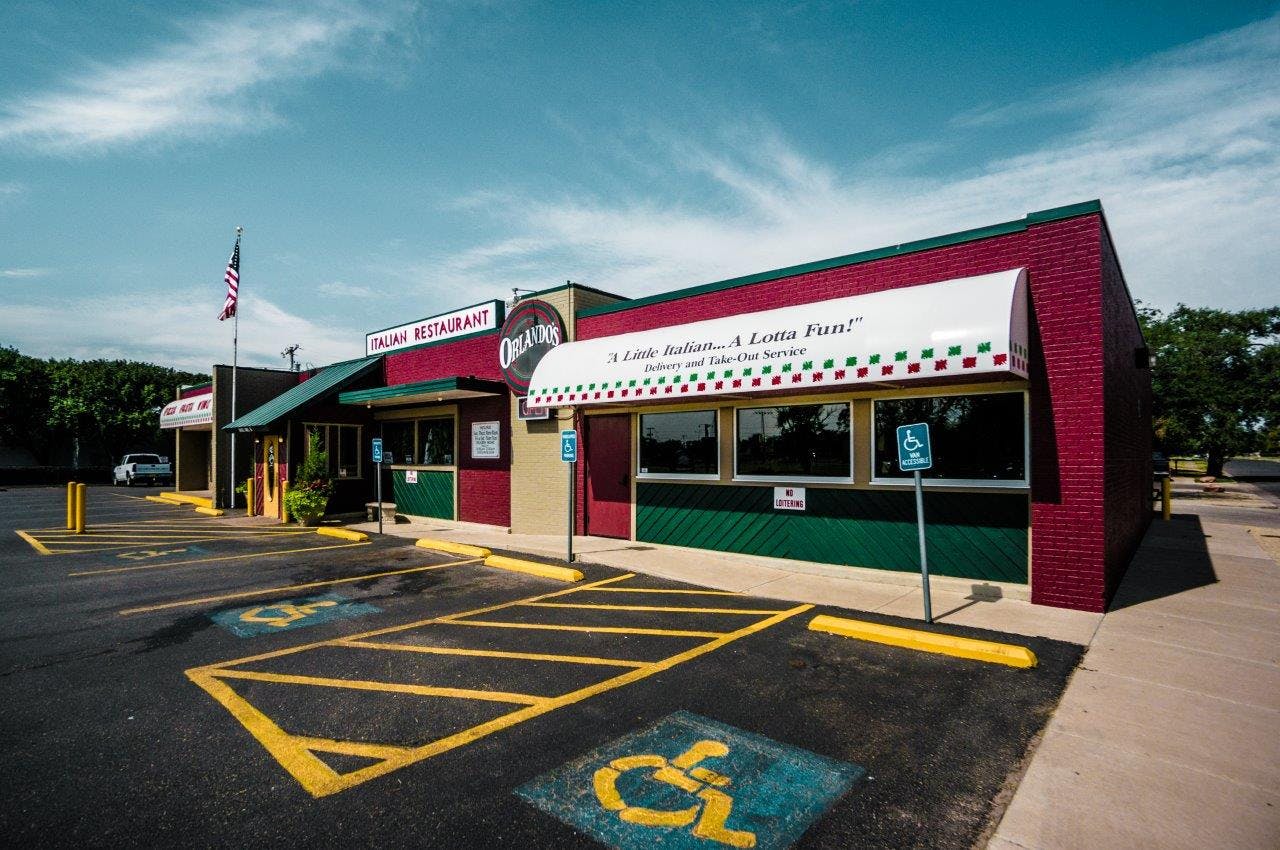 Loyd was born and raised in Fort Worth, Texas, and came to Lubbock to attend Texas Tech University in 1972. He graduated with a business management degree, which he eventually put to good use running these staples of the Lubbock restaurant scene (after he traveled the United States in his Volkswagen Bug). Loyd was passionate about natural living, and while looking for a place to open a natural food store, he heard Mike was looking for a restaurant partner. “I wanted to save the world by baking whole wheat bread,” said Loyd. “I ended up buying in with Mike, so I baked whole wheat bread at Orlando’s.”

At that time, Caprock Café had not been born yet and Orlando’s only had one location.

“It was in its infancy. The registers were not computerized; there were no cell phones; none of this was happening yet,” Loyd said.

In 1984, Orlando’s opened its second location. In 1997, the first Caprock Café opened, followed by a second location in 2008. As the companies grew into some of the best restaurants in Lubbock and technology evolved, the technical workload became too much for Loyd to handle on top of his other restaurant duties.

“I had to have help,” Loyd said, “so Karen, my wife, suggested Adrienne. He's our CIO, and he graduated from Texas Tech with an MIS degree, so he became my computer guy.”

Meanwhile, Loyd had been working with Tom Mandry Electric for the restaurants’ electrical needs since 1979 or 1980. Loyd watched Tom’s son, Thomas, now owner and CEO of Mandry Technology Solutions, grow a passion for computers and start his company by officing out of a small space in the back of his dad’s electrical shop.

“792-3511. That was their number, still is,” said Loyd about Tom Mandry Electric, now known as TM Electric. “I met Thomas when it was one guy who had a little place in his dad's electrical shop. We’ve been clients since Mandry Technology Solutions was an idea, before he even moved and got his own place. I knew Thomas’s dad, Thomas's work ethic, and I could tell he was going to be a chip off the old block. He's a good one.”

On top of knowing the Mandry family, Loyd didn’t feel any of the other IT services companies in Lubbock could rival what Thomas offered. He mentioned how a few organizations had closed unexpectedly, and the only one that persisted was pricey.

“There really wasn't anything like it. I can't stress that enough,” he said. “I had a vendor, I’ll never forget, I go to the door and basically they’re gone. They’re just gone. The only people that endured…were the ones we couldn’t afford. It's ungodly expensive, and I don't know what all they do. There's probably parts of what you do but I would think Mandry would be the preeminent firm. I want somebody that does technology, I mean ‘technology solutions’ in their name. I want that. I want what Thomas does.”

It was also important to Loyd that the organization he worked with be local.

“We're not tourist-oriented. We’ve got to please the locals or we won't exist,” said Loyd. “I never considered looking outside Lubbock for what we need because we need somebody to bring a computer onsite. I never thought for a minute I’d outsource it to another city because we need boots on the ground.”

Building a Network — Together

Thomas and Loyd began working together when Mandry was in its infancy and Orlando’s was growing fast. Thomas helped Loyd acquire some hardware and tools before entering a managed services partnership to handle his restaurant technology.

“The thing we didn't have at the time was a way to talk to the stores securely and consistently and have it up all the time,” said Loyd. “We went from modems and dialing in and stuff sort of working to establishing a real network, a VPN [virtual private network]. That was really their first project was to establish the network between the stores. It became critical.”

Mandry’s services supplement the restaurants’ in-house IT efforts. Adrienne Crosby, the CIO for Orlando’s and Caprock (a.k.a. Loyd’s computer guy), focuses on business applications and makes decisions about whether they should be hosted in the cloud, managed locally, or outsourced. He vets vendors, determines system add-ons, and manages reporting and all day-to-day IT. Mandry’s function is to take additional workload off Adrienne.

“There are times where Adrienne can't be the technology guy, he needs to be the restaurant guy,” said Robert Hassell, Mandry’s virtual CIO who works with Orlando’s and Caprock, “and there are times where Loyd and Adrienne will have questions on new or different technology, and they'll want to talk to me about it. I can give them alternatives or options and things to think about. We’re looking at business outcomes, not projects. We ask, ‘What’s the outcome going to be for the business?’ I look at a business, I see what their needs are, I see how they work, how they run their company, and take those things into account when bringing technology in.”

“A lot of what we’ve paid for and experienced is the lack of problems that could have befallen us if we didn’t have some oversight. The lack of stuff is the best thing, the not worrying, not being attacked by a virus, not having things crash, not having down time, not having switches go out.”

After nearly 20 years of working together, Loyd can attest to the benefits and assurance of having a third party manage, strategize, and advise on IT services.

“A lot of what we've paid for and experienced,” he said, “is the lack of problems that could have befallen us if we didn't have some oversight. The lack of stuff is the best thing, the not worrying, not being attacked by a virus, not having things crash, not having down time, not having switches go out.”

On top of peace of mind, Loyd can speak to how reliable the network is, how up to date the technology and hardware stay, and how informed he and Adrienne are kept.

“The network is faster and consistent and stays on and works,” he said. “Connectivity is just kind of a given. If something doesn't work, we call [Robert]. We don't have to worry about replacing computers or staying on top of things like the switches. They suggest a reasonable migration path. Things get better, faster, cheaper, and we get things that fit our needs.”

Finally, in addition to the lack of headaches Loyd and his team have had to experience and the reliability and consistency they can count on related to IT, the speed of processes like batch reporting have greatly increased.

“Those reports the managers have to run at the end of the day,” said Robert, “the time went from 30 minutes to less than five minutes now because of the new environment the server resides in at the restaurant location. That's a huge performance improvement.”

“It is,” agreed Loyd. “My time is not millions, but it adds up — a second here or two seconds there. So, when the managers are waiting for their reports, if they wait 30 minutes or more, it’s a long time.”

Twenty years is a long time for two organizations to work closely together. Having been around since Mandry’s very beginnings, Loyd has seen the organization grow, transition, evolve, and adapt. Mandry has seen Orlando’s and Caprock modernize their operations while staying true to the values that started it all.

“I credit the golden rule,” said Loyd. “That’s the foundation of all. Take care of the employees, of vendors and customers. We just want to do the right thing generally whenever we can and that's kind of the essence of it.”

And Loyd lives up to those values.

“I want you to charge me enough because I want you to be around,” he said. “I'm invested in Mandry’s success. Anything that makes them better makes us better.” He is a wonderful partner to have and Mandry is fortunate and grateful for all he has taught us over the years. Loyd Turner, Orlando’s Enterprises, Inc., and Caprock Restaurants, Inc. are part of who Mandry Technology Solutions is. They were there for our beginnings, they have grown alongside us for decades, and we are lucky to call Loyd and his team friends as well as partners.

Stay up to date on the latest content in information technology.